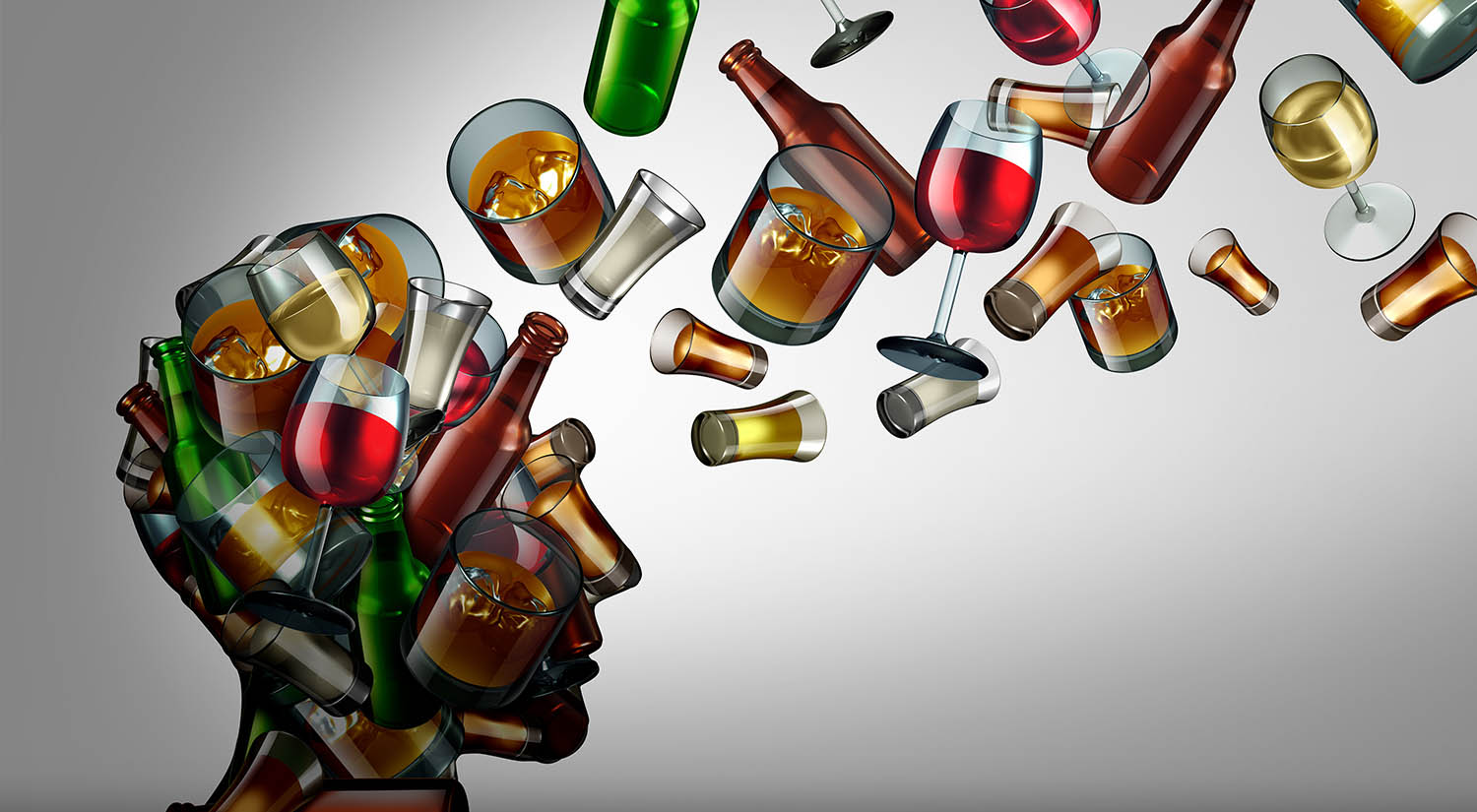 Alcohol is a depressant drug that slows down your central nervous system, it can change the way you think and reduces your ability to deal with difficulties. Alcohol can lower your mood or increase anxiety.

Alcohol alters the brain’s chemistry, depleting serotonin levels, a chemical which regulates your mood and increases the risk of depression. It is often associated with a range of mental health problems, and people suffering from anxiety or depression are twice as likely to be heavy or problem drinkers.

Extreme levels of drinking can occasionally cause psychosis, a severe mental illness where hallucinations and delusions of persecution develop. Psychotic symptoms can also occur when very heavy drinkers suddenly stop drinking and develop a condition known as ‘delirium tremens’

Mental health and alcohol problems often go together. For some people anxiety or depression may lead to them drinking to relieve it. For others, drinking came first, so it may be a root cause of their anxieties.

Heavy drinking often leads to work and family problems, which in turn can lead to isolation and depression. For heavy drinkers who drink daily and become dependent on alcohol, there can be withdrawal symptoms (nervousness, tremors, palpitations) which resemble severe anxiety, and may even cause phobias, such as a fear of going out.

For some people going through a tough time, drinking can be a way to cope. It can work in the short term but whatever benefits you think it has,  it is only temporary. If alcohol is mixed with prescribed medications it can be harmful, particularly with other depressants like painkillers or anti-anxiety medications, intensifying the effects, slowing your breathing and could lead to loss of consciousness and even stop you breathing altogether.

Alcohol can make people lose their inhibitions and behave impulsively, so it can lead to actions they might not otherwise have taken – including self-harm and suicide.

Warning signs that alcohol is affecting your mental health include:

Things you can do to prevent alcohol affecting your mental health include:

Our brains rely on a delicate balance of chemicals and processes. Alcohol is a depressant, which means it can disrupt that balance, affecting our thoughts, feelings and actions – and sometimes our long-term mental health. This is partly down to ‘neurotransmitters’, chemicals that help to transmit signals from one nerve (or neuron) in the brain to another.

The relaxed feeling you can get when you have that first drink is due to the chemical changes alcohol has caused in your brain. For many of us, a drink can help us feel more confident and less anxious. That’s because it’s starting to depress the part of the brain we associate with inhibition.

But, as you drink more, more of the brain starts to be affected. It doesn’t matter what mood you’re in to start with, when high levels of alcohol are involved, instead of pleasurable effects increasing, it’s possible that a negative emotional response will take over. You could become angry, aggressive, anxious or depressed.

Unfortunately reaching for a drink won’t always have the effect you’re after.
While a glass of wine after a hard day might help you relax, in the long run it can contribute to feelings of depression and anxiety and make stress harder to deal with. This is because regular, heavy drinking interferes with neurotransmitters in our brains that are needed for good mental health.

When we drink, we narrow our perception of a situation and don’t always respond to all the cues around us. If we’re prone to anxiety and notice something that could be interpreted as threatening in the environment, we’ll hone in on that and miss the other less threatening or neutral information.  For example, we might focus on our partner talking to someone we’re jealous of, rather than notice all the other people they’ve been chatting to that evening.

If you drink heavily and regularly you’re likely to develop some symptoms of depression. It’s that good old brain chemistry at work again. Regular drinking lowers the levels of serotonin in your brain – a chemical that helps to regulate your mood.

Drinking heavily can also affect your relationships with your partner, family and friends. It can impact on your performance at work. These issues can also contribute to depression.

If you use drink to try and improve your mood or mask your depression, you may be starting a vicious cycle…

Warning signs that alcohol is affecting your mood include:

Alcohol is linked to Suicide, Self-Harm and Psychosis

Alcohol can make people lose their inhibitions and behave impulsively, so it can lead to actions they might not otherwise have taken – including self-harm and suicide (3).

More than half of people who ended up in hospital because they’d deliberately injured themselves said they’ve drunk alcohol immediately before or while doing it.

Extreme levels of drinking (such as more than 30 units per day for several weeks) can occasionally cause ‘psychosis’. It’s a severe mental illness where hallucinations and delusions of persecution develop. Psychotic symptoms can also occur when very heavy drinkers suddenly stop drinking and develop a condition known as ‘delirium tremors’ – symptoms include body tremors and confusion.

Alcohol can damage your memory

Soon after drinking alcohol, your brain processes slow down and your memory can be impaired. After large quantities of alcohol, the brain can stop recording into the ‘memory store’. That’s why you can wake up the next day with a ‘blank’ about what you said or did and even where you were. This short-term memory failure or ‘black out’ doesn’t mean that brain cells have been damaged, but frequent heavy sessions can damage the brain because of alcohol’s effect on brain chemistry and processes.

Drinking heavily over a long period of time can also have long-term effects on memory. Even on days when you don’t drink any alcohol, recalling what you did yesterday, or even where you have been earlier that day, become difficult.