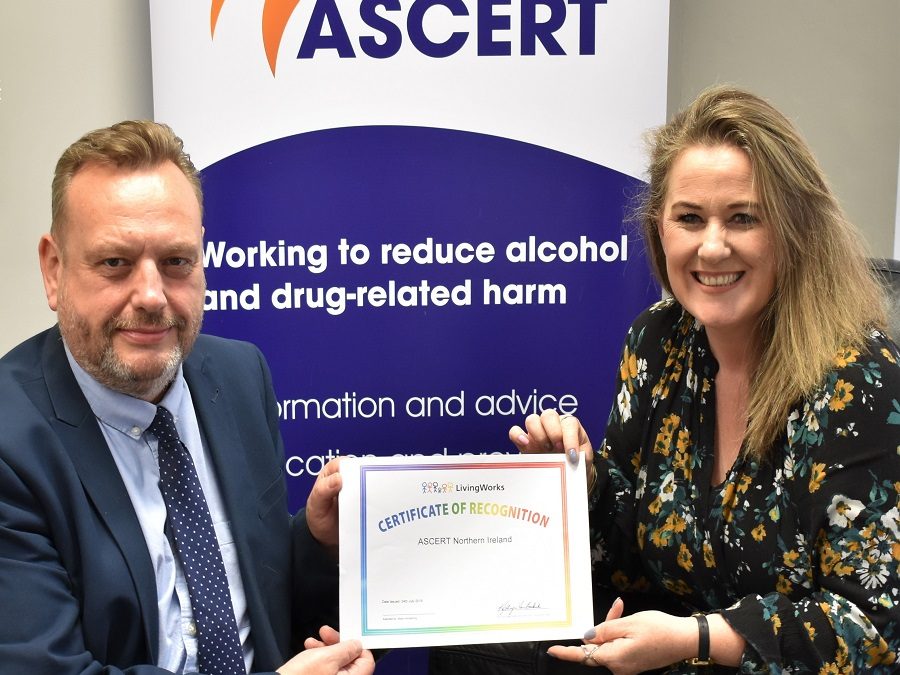 ASCERT have been recognised by Alison Armstrong and Living Works for their contribution towards creating a suicide safer community.

ASCERT have nominated 4 ‘Protect Life Champions’ who have been established in each of their 4 offices throughout Northern Ireland. They meet regularly and carry out actions arising from the organisation’s suicide prevention strategy and are there to provide quick and accessible support to their colleagues either before during or after an intervention.

ASCERT has also established an employment assistance programme for its entire staff and recognises good working conditions as being essential to good mental health. ASCERT’s Chief Executive also gives staff additional leave on World Mental Health Day (10th October), in recognition of the importance of their own mental health.

Congratulating ASCERT on the award, Kelly Gilliland, Senior Health Improvement Officer with the Public Health Agency in Northern Ireland said: “As one of the leading charitable organisations working on both drugs and alcohol and suicide prevention, I am delighted that ASCERT’s work in this field has been recognised by Living Works.

“Thanks to ASCERT a wide range of people have been trained from across Northern Ireland as they have provided Northern Ireland with 3 ASIST T4T’s training 54 new trainers and a Safe Talk T4T thereby increasing capacity to provide support to those in despair and distress at both a community and organisational level.”

Alison Armstrong said: “ASCERT have also delivered to over 1,500 people in our community in suicide prevention skills by providing ASIST workshops. I am proud of the work that ASCERT has done around suicide prevention, I feel they have raised the bar to a gold standard and I am delighted to be part of it.”