Alcohol itself is a colourless liquid; it can be made from almost anything that has sugar in it. For example, beer is made from barley, cider from apples, wine from grapes, and whiskey from grain. Alcohol plays a part in many of our lives, yet it’s surprising how little people know about its contents. Depending on what they are made from, and how they are made, different drinks have different amounts of alcohol in them. Percentages appear on bottles/cans with the letters ‘ABV’ which stands for ‘Alcohol by Volume’. The higher the percentage, the greater the alcohol content. 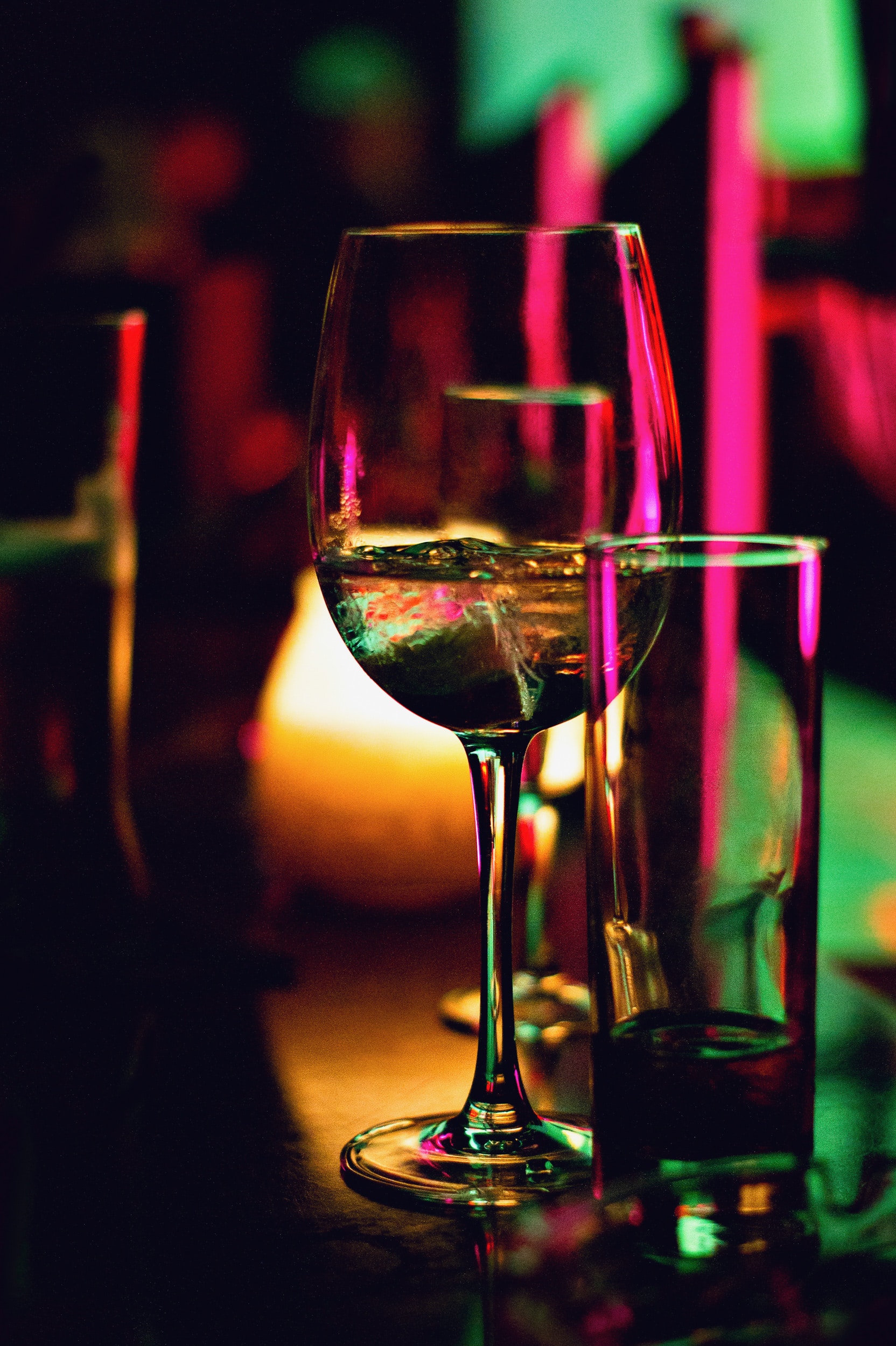 Why Do People Drink?

Alcohol is a very commonly used drug and there are many reasons some people
drink alcohol. To relax, socialise, or cope with everyday problems are just some of the reasons .

Some important things to understand about alcohol use:

Many people can drink at safe levels and won’t experience any negative effects, therefore you don’t need to worry about all alcohol use. This can be normal behaviour for adults

Alcohol is one of the world’s most widely used drugs. A glass of wine with dinner, a beer after work, a cocktail in the sunshine on holiday, alcohol makes an appearance in so many parts of our lives; it can be easy to forget that, like many drugs, it’s addictive, both physically and psychologically. Alcohol is a very commonly used drug and it is used for many reasons: To relax, socialise, or cope with everyday problems are just some of the reasons.

The World Health Organisation has set guidelines in place to encourage us to keep our alcohol intake within safe levels, to prevent a negative impact on our health. To do this, we need to keep track of the number of units we are consuming. Units of alcohol are the measure of the volume of pure alcohol in an alcoholic beverage. One unit is 10ml of pure alcohol. Sometimes, for a number of reasons people drink too much alcohol.

Both Men and Women should drink no more than 14 units of alcohol per week, no more than three units in any one day, and should have at least two alcohol-free days a week.

No-one plans to become addicted. It can develop very slowly over time. See the Stages of Use in the Cycle below... 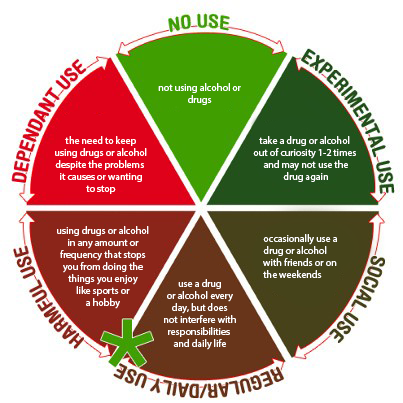 Although the stages of addiction are different for everyone, it is good to have a general idea of how addiction progresses.

No use: Before anyone tries any drug they begin at the ‘No Use Stage’. Experimental use: This is when someone starts to take alcohol or drugs to see what effects it has. This will likely be a choice you will be faced with at some stage in your life. Some never take alcohol or drugs but some people will experiment, and then stop after a little time. For others, this can be the first step in a struggle with substance misuse.

Social use: This is where people use more often, when they are with friends or in social settings, going out at the weekends or drinking after work for example. You may notice a compulsion that starts to become a more than regular occurrence.

Daily or Regular Use: This where the person is drinking or using drugs most days and may be finding that it’s a part of their everyday life. In this case it is more likely it is having an effect on their health, work or their relationships. It may lead to interference with everyday life and avoiding responsibilities.

Harmful Use: At this stage, it is causing problems in their life and they are likely to be finding that drinking or using drugs is more important to them than other things in their life like their job or their family. The substance becomes the priority for them and this may mean they start to organise their routine around the drinking or drug use or put themselves in situations or with people that enable them to use. Despite knowing that their use is causing harm to them they choose to continue despite the consequences.

Dependent Use. This is where they have become addicted to the alcohol or drug use and it has become something that feels they need to do and there will be physical signs if they do not take the alcohol or drug. They will have cravings to use and feel unwell because their body has become dependent on it. In this case, they are not able to stop using without help and support.

Characteristics of addiction can include:

However, someone does not have to be addicted or dependent on alcohol for it to be having a negative impact on them or their family.

Advice from the Department of Health states that if you are pregnant or planning a pregnancy, the safest approach is not to drink alcohol at all, to keep risks to your baby to a minimum.

For an adult, small amount sof alcohol taken sensibly is ok, and lots of people do it. However some people are unable or do not want to drink small sensible amounts. Sometimes, for a number of reasons people want to drink to get drunk.

Below are some reasons for drinking alcohol people have used, and these can turn into excuses to get drunk:

See if any sound familiar.

Sometimes, reasons for a drink turn into excuses to get drunk.

“The sun is shining”

“I haven’t got work tomorrow”

“I need to get in the mood to socialise”

What is alcohol addiction

Alcohol is one of the world’s most widely used drugs. A glass of wine with dinner, a beer after work, a cocktail in the sunshine on holiday, alcohol makes an appearance in so many parts of our lives; it can be easy to forget that, like many drugs, it’s addictive, both physically and psychologically.

When someone is addicted to alcohol they feel like they HAVE to drink some in order to feel more like themselves again. For some people who are addicted to alcohol, if they don’t have a drink they can start to become unwell, and it can be dangerous to stop drinking all of a sudden in these cases.

No-one plans to become addicted. People may think that they can handle their alcohol or drug use, but when they want to change the way they use, they may find it’s not that simple.

However, not all people who drink too much are addicted. Some may only drink every so often, or at the weekend, or on special occasions. Sometimes on these occasions, they can drink beyond safe levels and this is called binge drinking and can be just as difficult for you to live with. Steps to Cope can support you even if your parent doesn’t drink every day.

Binge drinking is when someone drinks too much alcohol in a short space of time. This can happen every so often, or regularly. Not only is binge drinking damaging to the individual’s health, but it can also prove to be a difficult experience for family members too.

People who live in families where someone drinks too much alcohol might experience other problems too such as mental health problems, or domestic violence.

Below are two signs a person’s alcohol use is a problem.

Someone may not see that their substance use is out of control and causing problems in their lives. they may drink more than they intend to, or in situations where they don’t want to drink.

If a person continues to drink or use drugs despite the problems it causes – it can be a pretty good sign it’s a problem.

Regardless of how much alcohol your parent drinks, if you feel like you are being affected, it is important to talk to someone about it.

Here are some top tips from the Public Health Authority on how to stay at safe limits when drinking alcohol:

Tips
Check how many units are in your chosen drink

Also advice from the Department of Health states that if you are pregnant or planning a pregnancy, the safest approach is not to drink alcohol at all, to keep risks to your baby to a minimum.

Regardless of how much alcohol your parent or family member drinks, if you feel like you are being affected, it is important to talk to someone about it. Steps to Cope can help you.